We have access to 80 private and secluded acres in West Central Minnesota. Minnesota is well known for its Whitetail Deer and has consistently ranked in the top ten Pope and Young states. These 80 acres are home to an excellent number of deer, as well as a good numbers of bear, turkey, and grouse. The property is sandwiched between corn and alfalfa fields making it a huge transitional corridor for these animals.

Wake up to the crisp cool morning air and the sound of turkeys gobbling, and fall asleep to the sound of loons and an occasional wolf howl. I will be guiding one Veteran for this hunt, and it will take place over a three day span. This hunt is archery only and open to any Veteran, however, a Minnesota resident is optimal. BYOB (Bring Your Own Bow) and The Veteran Hunter will help offset as much of the cost as possible. Thanks!

Last month, Travis, a former Green Beret, and his wife had a great time at the Minnesota cabin! Travis hunted hard for several days and despite seeing multiple deer and turkeys, nothing presented him with that slam dunk shot. Nevertheless, our time in the woods was amazing as always.

A few days after their departure, my girlfriend and our Director of Operations, Brittney, arrived. She was fortunate enough to harvest her first deer ever! 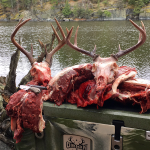 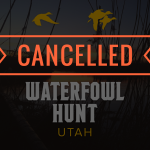