There isn’t a larger surge of adrenaline than when a 1,000 lb bull elk is bugling in your face at just 10 yards. In my opinion, bowhunting elk is the most exciting hunt due to the fact that it occurs during mating season called the rut.

During the rut is when elk are the most vocal which allows the bulls to be called in VERY close. Start sharpening your broadheads, hitting the range and practicing your elk calls!

Well, after a grueling but amazing 12 days of hunting and averaging 15 miles a day on foot, we are mission complete. With meat in the freezer and many hours of fellowship logged we couldn’t be happier! Ty Elledge, an Air Force Veteran from the RPA/Intel community, has been a great friend and was an even better hunting partner.

While talking to the herd bull we were crossing an open area on the side of a mountain and were caught by surprise by a spike bull who was curious about our calls. Ty was out front for the best chance of a shot but quickly had 6 cow elk and a spike bull staring him down. Not wanting to pass on a chance for one of us to tag out on day 4 I knocked an arrow and made a few more calls and was able to double lung him at 15 yards! After watching him tip over we continued pursuit of the herd bull but the commotion of the kill had pushed the rest of the herd over the ridge. Weather being in the mid 70’s it was imperative that we took care of the meat before it spoiled so we took the next 8 hours to cut him up and pack him out.

We stalked and called in 2 other bulls during the trip one of which was a real nice 5×5 who went silent for the last 300yds of the infil and busted us at about 80yds.

Apparently we should have had a bear tag with us due to our multiple encounters. The second encounter of the trip was on the last morning. After rounding a corner we we staring down a 300lb black bear at a mere 10yds before we started shouting at him as he bolted into the brush. The brush also happened to be on the trail we were on…quote of the trip, “I ain’t no bitch, but I ain’t going in there.” – Brian Wadtke. I guess there is a reason it is a draw unit for bear, lots of them!

Thank you everyone for following along with us. Up next… Ontario Whitetail buck hunt! 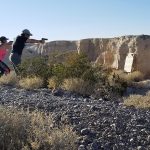